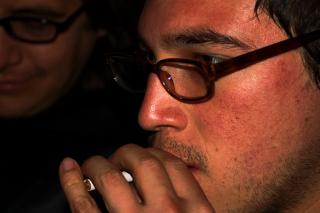 Working with silence, vibration, ambiguity and the spatial realities imposed by an exhibition context, Mario de Vega observes sound as a psychological event, which automatically incorporates the possibility of a non-happening as well. As a sound artist, de Vega’s works often act as translations of high and low frequencies into audible sounds - displaying a particular interest in using infrasound to produce visceral, psychoacoustic reactions in the listener. Exploring the physicality of listening and the threshold of human perception, Vega researches the materiality of sound, the vulnerability of systems, materials and individuals, and the potential of unstable systems. His work has been exhibited in Mexico, Canada, United States, Chile, South Africa, India, Russia, Japan and in most of the main capitals in Europe. He lives and works since 2008 in Berlin and Mexico City.