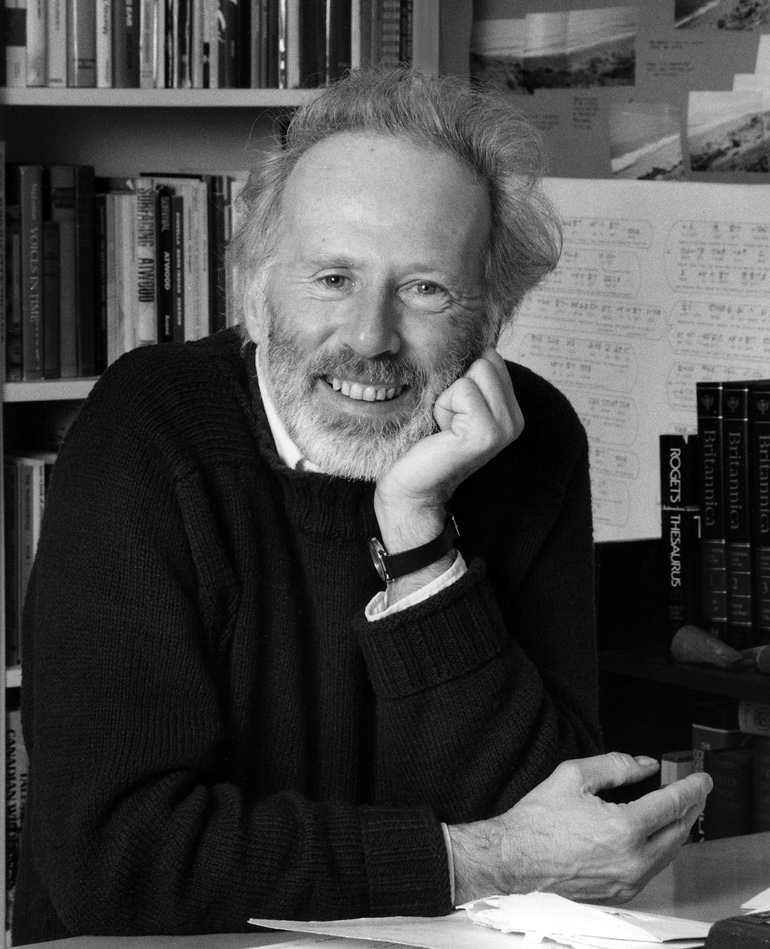 Raymond Murray Shafer is a Canadian composer and founder of acoustic ecology. He was born in Sarnia, Ontario, in 1933, but was raised in Toronto. Schafer entered the Royal Conservatory of Music and the University of Toronto in 1952 to study with John Weinzweig. His casual contact with Marshall McLuhan on campus in that period could arguably be singled out as the most lasting influence on his development. He went to Vienna in 1956. After two years he went to England, studying informally with composer Peter Racine Fricker. While in Britain Schafer supported himself by writing (resulting in a book, British Composers in Interview) and by the preparation of a performing edition of Ezra Pound's opera Le Testament (1920-1) broadcast by the BBC in 1961.

Returning to Canada in 1961, he directed the Ten Centuries concerts, and began teaching, first (1963-65) as artist-in-residence at Memorial University, and then (1965-75) at Simon Fraser University. At SFU, with grants from UNESCO and the Donner Canadian Foundation, he set up the World Soundscape Project for the study of the relationships between people and their acoustic environment. Schafer moved in 1975 to a farm near Maynooth, Ontario, but has remained affiliated with the project. He purchased a farmhouse near Peterborough in 1987. Schafer's early Concerto for Harpsichord and Eight Wind Instruments, and the Sonatina for Flute and Harpsichord (or Piano) reveal debts to Weinzweig, the neoclassicism of Stravinsky and 'Les Six'. The Minnelieder, with its Mahlerian atmosphere, was in Schafer's opinion his first important achievement.

In the early 1960s Schafer drew on serialism, also drawing on the language, literature, and philosophy of ancient cultures, leading to an exploration of the mythology and symbolism of modern life. That resulted in a succession of studies on the urban themes of alienation and psychoneurosis.

Schafer's involvement in music education led to his booklets, The Composer in the Classroom, Ear Cleaning, The New Soundscape, When Words Sing, and Rhinoceros in the Classroom. These illustrate his experiences with students and are among the first introductions to John Cage's concepts of creative hearing and sensory awareness into the Canadian classroom.

In the late 1960s and 1970s Schafer revealed a widening stylistic and linguistic boundary along with a tendency towards mysticism. The sources are of a rich and unorthodox diversity, many revealing Schafer's interest in eastern thought.

As the 'father of acoustic ecology' Schafer has been concerned about the damaging effects of noise on people, especially dwellers of the 'sonic sewers' of the city. His booklets The Book of Noise and The Voices of Tyranny are pleas for anti-noise legislation and urban soundscape improvements through reduction of potentially destructive sounds. Of the various publications Schafer released after his work with the World Soundscape Project, the most important is The Tuning of the World (1977) where he summarizes his soundscape research, philosophies, and theories. The concept, central to Schafer's thinking, has influenced his composing. The background rhythmic structure for String Quartet No. 2 ('Waves') is based on the intervals at which ocean waves crest; the graphic notation of No Longer Than Ten (10) Minutes was influenced by charts made of Vancouver traffic noise.

Schafer's search for a 'hi-fidelity' soundscape led to his move to an Ontario farmhouse, which then inspired a series of 'natural-environment' works. The first was Music for Wilderness Lake, for twelve trombones. The premiere in 1979 by the Ontario trombone choir Sonaré was recorded by the CBC near Schafer's home and was filmed by Rhombus Media. His soundscape interest is also reflected in the works employing spatial distribution of the performers, the most ambitious being Apocalypsis, which calls for 500 performers.

Schafer's rural environment allowed him to work with communities in Maynooth and Peterborough, remarkable models for how artists could integrate into the societies of which they find themselves members. Schafer founded the Maynooth Community Choir, with whom he wrote and produced the music theatre piece Jonah. He chose his rural home near the Peterborough area to work on artistic projects with this community. The productions of Patria 3: The Greatest Show in Peterborough in 1987 and 1988 included the participation of local amateurs. During Schafer's years as the artistic director of the Peterborough Festival of the Arts, he helped steer a small, local undertaking with traditional programming towards an ambitious, diversified arts festival garnering both strong regional support and national recognition.

Schafer encourages artists to draw on the riches of their local surroundings and culture. The beauty of Canada's wilderness is the setting of the Patria prologue The Princess of the Stars, which will be performed in August 2007 at the Haliburton Forest and Wild Life Reserve in central Ontario. Other outdoor works include The Enchanted Forest and The Palace of the Cinnabar Phoenix performed at the Haliburton Forest in 2005 and 2006.

Besides his works as a composer, dramatist, music educator, music journalist, and in the new field of soundscape studies, Schafer has made significant contributions to the humanities as musicologist/literary scholar, creative writer, and visual artist. His E. T. A. Hoffmann and Music is the first book-length study on the subject and his Ezra Pound and Music is a major achievement of musical and literary scholarship. Schafer is actually best known for his writings on music education and the soundscape. In addition to prose works he has also written a number of creative literary pieces which include the novellas Dicamus et Labyrinthos and Ariadne, both of which exhibit the composer's calligraphy and art. Schafer's visual art can also be seen in many scores which include illustrations and/or graphic notation. Some of these were exhibited in art galleries.