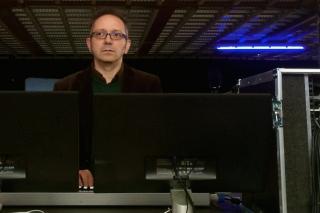 Aki Pasoulas is a Senior Lecturer at the University of the Arts London, and at Middlesex University. His teaching includes courses on acoustics, psychoacoustics, electroacoustic composition, digital audio, and multi-channel sound. His doctoral research, supervised by Denis Smalley at City University London and funded by the Arts and Humanities Research Board (AHRB), investigated the listener’s experience and interpretation of time passing and the interrelationships among timescales in electroacoustic music. Research interests include electroacoustic music, particularly acousmatic music; time and timescale perception; psychoacoustics and sound perception; spatial sound; and soundscape ecology, especially in relation to listening psychology. He is a board member of the UK and Ireland Soundscape Community. Further research interests include microsound, spatialisation, sound poetry and the use of voice in non-western musics. Aki originally studied and worked as a graphic designer, before embarking on music studies, gaining a first class honours music degree and a distinction for his master’s degree in electroacoustic composition, both at Goldsmiths College, University of London. Aki has written many pieces for various combinations of instruments, found objects, voice, recorded and electronic sound, and many poems. He has composed music for the theatre and for short experimental films, and has also organised and performed with various ensembles. His works have been selected at key peer-reviewed events including the ICMC conferences in Montreal, New York, Huddersfield, Ljubljana, and Shanghai, the SMC in Porto and Limassol, the international Festival Synthèse in Bourges, France, the Sonoimágenes international acousmatic and multimedia festival in Buenos Aires, the SAW electroacoustic symposium in Cardiff, the ISCM World New Music Days festival in Sydney, the Festival Futura of acousmatic art in Crest, France, the WFAE international conference on acoustic ecology in Corfu, the International Exhibition at the BYTE Gallery in Lexington USA, the ISSTA conference in Ireland, the CIME/ICEM General Assembly in Beijing, the Convergence conference at De Montfort in Leicester, and the EMUFest international electroacoustic music festival in Rome.