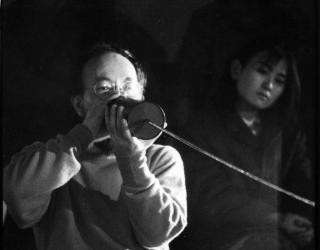 Akio Suzuki (born 1941 in Pyongyang, North Korea) is musician and soundartist. Since his infamous “Throwing Objects Down a Staircase” event at Nagoya Station in 1963 and the self-study events which followed, where he explored the processes of “projection” and “following” in the natural world, Suzuki has pursued listening as a practice. In the 1970s he created and began performing on a number of original instruments, including the echo instrument Analapos. In 1988 he performed his piece “Space in the Sun”, which involved purifying his ears for twenty-four hours in nature on the meridian line that runs through Amino, Kyoto. In 1996, he began his “o to da te” project where he seeks out echo points in the urban environment. Has performed and exhibited at many venues and music festivals around the world, including Documenta 8 (Germany, 1987), the British Museum (2002), Musée Zadkine (France, 2004), Kunstmuseum Bonn (Germany, 2018), Museum of Contemporary Art Tokyo (Tokyo, 2019), etc.