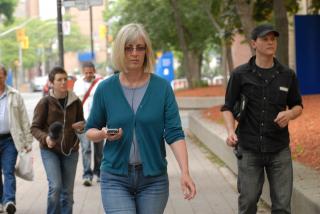 Andra McCartney (1955-2019) was an Associate Professor in the Department of Communication Studies, Concordia University, where gave courses on sound production, research creation, and sound theory. She was a soundwalk artist, leading public walks and creating gallery installations, recordings, performances and radio works. Her works can be heard on the internet, on CBC radio, and on CDs produced by Deep Wireless, Terra Nova, and the Canadian Electroacoustic Community. She received her PhD in Music from York University in Toronto, studying with James Tenney and Beverley Diamond, with a dissertation on the soundscape work of Vancouver composer Hildegard Westerkamp. Andra published articles with Organised Sound, Leonardo Music Journal, Perspectives of New Music, Musicworks, Axis Voor de Kunsten V/M, Contact!, Array, Resources for Feminist Research, and Borderlines, as well as chapters of several edited volumes, including Performing Nature, Aural Cultures, Gender and Music, Ghosts in the Machine. In 2002, she edited an issue of the journal Organised Sound on the topic of soundscape composition. In 2006, she co-edited with Ellen Waterman a special issue of Intersections Journal of Canadian Music, based on papers presented at the “In and Out of the Sound Studio” Conference on gender and sound technologies, which she directed at Concordia University in July 2005. Her recent research project, “Soundwalking Interactions,” investigates the ways that people listen and engage with soundwalks and artworks made from soundwalks.