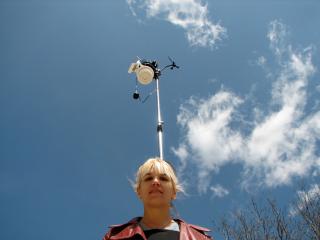 Andrea Polli is an environmental artist working at the intersection of art, science and technology. Her interdisciplinary research has been presented as public artworks, media installations, community projects, performances, broadcasts, mobile and geolocative media, publications, and through the curation and organization of public exhibitions and events. She creates artworks designed to raise awareness of environmental issues. Often these works express scientific data obtained through her collaborations with scientists and engineers and have taken the form of sound art, vehicle-based works, public light works, mobile media experiences, and bio-art and design. Polli holds an MFA in Time Arts from the School of the Art Institute of Chicago and a PhD in practice-led research from the University of Plymouth in the UK.

She has created and presented public artworks at 25 locations including a wind-powered light work covering the Rachel Carson bridge in Pittsburgh, a permanent light work for the University of Utah and building-scale works presented in the cities of San Jose California, Charlotte North Carolina, Detroit, Pittsburgh, Philadelphia, Hagen Germany and Zagreb Croatia. She has had over 20 solo exhibitions including at the Parco Arte Vivente Museum in Turin Italy, and her work has been presented in over 125 group exhibitions including in Paris, Berlin, Copenhagen, New York City, Chicago and Hong Kong. In addition to ten keynotes, since 2009 she has given over 200 professional presentations of her art and research.

Her artwork and research has received major support from The National Endowment for the Arts (NEA), The National Science Foundation (NSF) and Fulbright among others, including support for two over $1.5 million projects: the NEA and Intel-supported ISEA2012: Machine Wilderness Symposium for which she served as Artistic Director, and a 5-year NSF Division of Chemistry project titled Sustainable Energy Pathways in Engineering and Technology (SEPTET) for which she was a Co-Principal Investigator.

She co-edited the book Far Field: Digital Culture, Climate Change and the Poles published on Intellect Press and authored Hack the Grid published by the Carnegie Museum of Art, and has written and published eight book chapters and entries, 20 journal articles and conference papers, and several short editorial essays, curatorial statements.