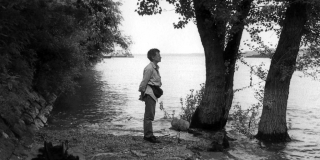 Annea Lockwood (b. 1939) is a New Zealand / American composer. She brings vibrant energy, ceaseless curiosity, and a profound sense of openness to her music. Lockwood’s lifelong fascination with the visceral effects of sound in our environments and through our bodies—the way sounds unfold and their myriad “life spans”—serves as the focal point for works ranging from concert music to performance art to multimedia installations. is known for her explorations of the rich world of natural acoustic sounds and environments, in works ranging from sound art and installations, through text-sound and performance art to concert music. During the 1970s and 1980s she turned her attention to performance works focused on environmental sounds and life-narratives, often using low-tech devices such as her Sound Ball, containing six small speakers and a receiver, designed by Robert Bielecki for Three Short Stories and an Apotheosis, in which the ball is rolled, swung on a long cord and passed around the audience. World Rhythms, A Sound Map of the Hudson River, Delta Run, built around a conversation she recorded with the sculptor, Walter Wincha, who was close to death, and other works were widely presented in the US, Europe and in New Zealand.

In 1973 feeling a strong connection to such American composers as Pauline Oliveros, John Cage, the Sonic Arts Union (Ashley, Behrman, Mumma, Lucier), and invited by composer Ruth Anderson to teach at Hunter College, CUNY, she moved again to the US and settled in Crompond, NY. She is an Emerita Professor at Vassar College. Her music has been performed in many venues and festivals. Her sound installation, A Sound Map of the Danube, has been presented in Germany, Austria and the USA. This is a surround ‘sound map’ of the entire Danube River, incorporating a wide variety of water, animal and underwater insect sounds, rocks from the riverbed and the voices of those whose lives are intimately connected to the river. Other recent projects include Ceci n’est pas un piano, for piano, video and electronics commissioned by Jennifer Hymer; Jitterbug, commissioned by the Merce Cunningham Dance Company, a six channel soundscape with two improvising musicians; and In Our Name, a collaboration with Thomas Buckner based on poems by prisoners in Guantánamo.

Annea Lockwood / a Film About Listening