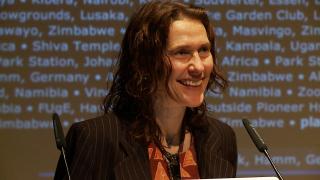 Claudia Wegener working under the name "Radio Continental Drift", has been recording sounds across Southern Africa for the past ten years. Claudia was a founding member of the artists’ group Foreign Investment. Through performances such as Good Morning Camberwell (curated by Mark McGowan, London 2005) and The Venice Oratory (curated by William Furlong, Venice 2005), Foreign Investment used sound to explore notions of free exchange and the airwaves as a meeting point between publicly and privately owned space. Around this time, Claudia’s own practice increasingly focused on sound and in particular her role as observer, THE SOUNDS OF A LISTENER WITH A BAG Alan Dunn introduces Radio Continental Drift or in her own phrases, “an artist with a bag” or “a listener with a bag”. Translating observational writing into audio, followed by composing audio observations into broadcasts, projects such as ‘Street Writings’ and ‘NO-GO-ZONES’ were frameworks to bring voices and listeners on a more equal footage as “active listeners”. With workshops and joined broadcasts, these projects passed the microphone on to homeless people and black youths in South London.