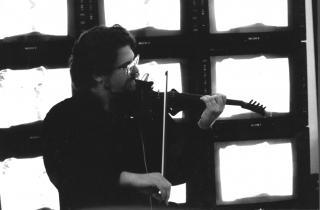 One of Dunn / Crutchfield’s collaborations most famous works is The Sound of Light in Trees (2006) which is an electroacoustic piece using only the sounds recorded in pine trees made by the Pinyon Engraver Beetle, which came from a research project.

David Dunn creates ‘environmental performance works’ which investigate, and often become a functioning part of, living environmental systems. Site-specific pieces such as Entrainments 1 (1984), Sonic Mirror (1986-87), and Autonomous Systems (2003-05), involve the soundscape of a natural ecosystem being recorded, processed, played back and recorded again, creating a feedback loop in which “certain participants in the environment – the flies, the birds – begin to ‘play’ the system, interacting with it.” This ultimately springs from Dunn’s conception of music as “a conservation strategy for keeping something alive that we now need to make more conscious, a way of making sense of the world from which we might refashion our relationship to nonhuman living systems…I have a gut intuition that music, as this vast terrain of human activity and inheritance of our species, will provide us with clues to our future survival, and that is a responsibility worth pursuing.”

Research: Over the last four decades Prof. Crutchfield has worked in the areas of nonlinear dynamics, solid-state physics, astrophysics, fluid mechanics, critical phenomena and phase transitions, chaos, and pattern formation. His current research interests center on computational mechanics, the physics of complexity, statistical inference for nonlinear processes, genetic algorithms, evolutionary theory, machine learning, distributed intelligence, animal behavior, and quantum computation. He has published over 250 papers in these areas; many are available from his website: