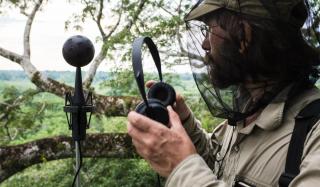 David Monacchi (1970) is an eco-acoustics researcher, composer and interdisciplinary artist. He has been developing the project “Fragments of Extinction” for more than 20 years, conducting field research in the world’s remaining areas of undisturbed primary equatorial forest in Amazon, Africa and Borneo. Multi-awarded throughout Europe and North America, Monacchi is pioneering a new compositional and science dissemination approach based on 24-hour-long 3D-sound recordings of entire ecosystems, as intangible natural heritage to foster discourse on the biodiversity crisis through science-based sound art. His Eco-acoustic Theatre invention (a spherical mobile space dedicated to hi-definition 3D soundscape listening) has received the international patent in 2014 and is now being built in museums and public spaces. He is founding member of the International Society of Ecoacoustics. A research fellow at Simon Fraser University – Vancouver in 1998 and a Fulbright scholar at University of California, Berkeley in 2007, Monacchi has taught at the University of Macerata from 1999 to 2010, and is now full professor of Electroacoustics at the Conservatorio “G. Rossini” of Pesaro (IT). A TEDx speaker in 2017, Artistic Research fellow at IRCAM-Centre Pompidou (Paris-2018), he has been invited as speaker at the plenary session of United Nations Conference *on Biological Diversity COP-14. The entire concept, fieldwork and current development of the project *Fragments of Extinction has been outlined in his book “L’Arca dei Suoni Originari” (The Sound Ark), published by Mondadori, being also the subject of his multi-awarded documentary film “Dusk Chorus” recognized as the Best European Science Documentary in 2018. In January 2020 the first *Sonosfera *– a 16-tons mobile spherical amphitheatre with 45 loudspeakers in perfect internal acoustics and 360° video – has been opened to the public in Pesaro, Unesco City of Music.

Monacchi states that his ultimate hope is that “bringing the sound of these biomes into concert halls, and perhaps revealing and interacting with their hidden aesthetic, helps to create an ecological awareness for repositioning our species within nature.”