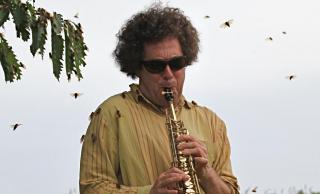 David Rothenberg is a composer and environmental philosopher, best known for his musical collaboration with birds, whales and bugs, particularly. Beside that he has performed and recorded on clarinet with Jan Bang, Scanner, Peter Gabriel, Ray Phiri, Markus Reuter, Pauline Oliveros, and the Karnataka College of Percussion. He is the author of Why Birds Sing, book and CD, published in seven languages and the subject of a BBC television documentary, Thousand Mile Song, about making music with whales, and Survival of the Beautiful, on aesthetics in evolution. His first CD on ECM Records, “One Dark Night I Left My Silent House,” a duet album with pianist Marilyn Crispell, appeared in May 2010 to wide acclaim. His latest book is Bug Music: How Insects Gave Us Rhythm and Noise, which has been profiled on Radiolab and in the New Yorker. He worked as music supervisor on the award-winning film Song from the Forest.