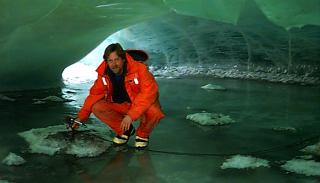 Douglas Quin is a sound recordist and composer whose works Oropendola (1994) and Forests: A Book of Hours (1999) blend acoustic and electronic musical improvisation with “unadulterated and unedited field recordings, processed soundscapes, electroacoustic instruments, human voice and hybridized sounds that comprise both living voices and electronically generated timbres.”28 His Polar Suite (2011), meanwhile, employs a wireless sensor bow called the ‘K-Bow’ to enable the Kronos Quartet to ‘play’ sounds captured by Quin at the North and South Poles, articulating them through their string instruments. Quin earned a B.A. in art from Oberlin College, where he studied electronic music with Dary John Mizelle. He earned an M.F.A. in sculpture and media arts from the School of the Boston Museum of Fine Arts and Tufts University, where he studied music composition with T. J. Anderson and sound art with Richard Lerman. He earned a Ph.D. in acoustic ecology from the Union Institute. His work has been performed at numerous festivals and venues including Merkin Hall, The Kitchen, the Kennedy Center for the Performing Arts and Spoleto Festival USA. He is the recipient of numerous awards and grants including the Ars Acustica International prize, multiple fellowships in music composition from the National Endowment for the Arts, Meet the Composer, the Pollock-Krasner Foundation and support from the National Science Foundation.

Quin reflects that the process of “negotiat[ing] the technology and relationship to natural sound, and soundscape into music…allows me and the people I’m working with – like Kronos – to understand…the connective tissue that binds us all together as living creatures and beings on this planet.”