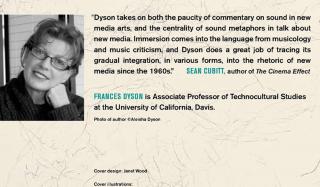 Frances Dyson is a writer, media artist and associate professor in Techno-Cultural Studies at the University of California at Davis. She is the author of The Tone of Our Times: Sound, Sense, Economy and Ecology (MIT Press, 2014). In this wide-ranging book, Dyson examines here the role of sound in the development of economic and ecological systems that are today in crisis. Connecting early theories of harmony, cosmology, and theological doctrine to contemporary media and governance, Dyson uses sound, tone, music, voice, and noise as forms of sonority through which the crises of “eco” can be read. The sonic environment, Dyson argues, is fundamental to both sense and sensibility, and its delimitation has contributed to the “senselessness” of a world now caught between spiraling debt and environmental degradation. Dyson draws on scenes, historical moments, artworks, and artistic and theoretical practice to situate the reverberative atmosphere that surrounds and sustains us. From Pythagoras's hammer and the transmutation of music into mathematics, to John Cage's famous experience in the anechoic chamber, to the relocation of the stock market from the street to the computer screen, to Occupy Wall Street's “people's microphone”: Dyson finds policies and practices of exclusion. The sound of Pythagoras's forge and the rabble of the market have been muted, rearticulated, and transformed, Dyson argues, through the monotones of media, the racket of financialization, and the gibberish of political speech. She published as well Sounding New Media: Immersion and Embodiment in the Arts and Culture (University of California Press, 2009), and the web based media project And then it was Now on E.A.T., 9 Evenings and Pavilion (Daniel Langlois Foundation for Art, Science and Technology, Montreal 2007.