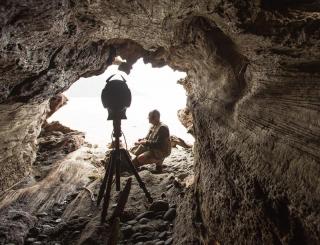 Gordon Hempton / Sound Tracker® is an acoustic ecologist, and Emmy award–winning sound recordist. For more than 35 years, he has provided professional audio services to musicians, galleries, museums, and media producers, including Microsoft, Smithsonian, National Geographic, Discovery, National Public Radio, and numerous other businesses and organizations. He has received recognition from the Charles A. Lindbergh Fund, the National Endowment for the Arts, and the Rolex Awards for Enterprise. Gordon studied botany and plant pathology at the University of Wisconsin. His sound portraits, which record quickly vanishing natural soundscapes, have been featured in People magazine and a national PBS television documentary, Vanishing Dawn Chorus, which earned him an Emmy for Outstanding Individual Achievement. Hempton is subject of a feature film, Soundtracker, and co-author of One Square Inch of Silence: One Man’s Quest to Preserve Quiet. He is founder and vice-president of The One Square Inch of Silence Foundation and Quiet Planet®. Hempton has circled the globe three times in pursuit of nature’s music and produced more than 60 albums available on iTunes. He lectures widely on the importance of listening. Gordon lives in Port Townsend, Washington.