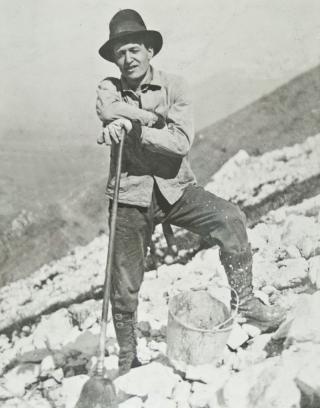 Harvey Fletcher (1884 — 1981) was U.S. physicist, a leading authority in the fields of psychoacoustics and acoustical engineering. Fletcher graduated from Brigham Young University in Provo, Utah, in 1907 and received a Ph.D. in physics from the University of Chicago in 1911. In 1916 he joined the staff of Bell Telephone Laboratories, where he worked for 33 years, primarily in the fields of speech, music, and hearing. Much of his work on the fundamentals of psychoacoustics is described in his book Speech and Hearing (1922). Fletcher’s research group developed and demonstrated two separate but related methods for reproducing sound: binaural sound reproduction and stereophonic reproduction. He and his team gave the first public demonstration of stereophonic sound in 1934 in New York City. In 1949 he moved to Columbia University, where he established a department of acoustical engineering. In 1952 he was appointed director of research at Brigham Young University, becoming dean of the College of Physical Engineering Sciences (1954) and professor of physics (1958). In 1974 he became professor emeritus, continuing his research in acoustics until a few weeks before his death. Fletcher's contributions to of speech perception are among his best-known work. He showed that speech features are usually spread over a wide frequency range, and developed the articulation index to approximately quantify the quality of a speech channel. He also developed the concepts of equal-loudness contours (commonly known as Fletcher–Munson curves), loudness scaling and summation, and the critical band. At Bell Labs, he oversaw research in electrical sound recording, including the first successful stereophonic recordings, the first live stereo sound transmission, and the production of the first vinyl recording. All of this was done with the help of the conductor of the Philadelphia Orchestra, Leopold Stokowski between 1931–32. Some of his other accomplishments include the production of the first functional hearing aid, the 2-A audiometer, and the artificial larynx.