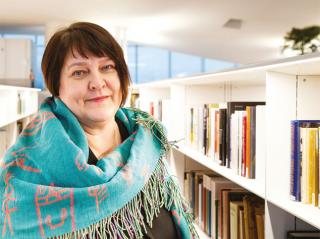 Helmi Järviluoma-Mäkelä (born 1960 in Ylivieska, North Ostrobothnia) is a Finnish sound, music, and cultural scholar and writer. She is a Professor of Cultural Studies at the University of Eastern Finland. As sensory and soundscape ethnographer, Järviluoma has developed the mobile method of sensobiographic walking. Her research and art spans the fields of sensory remembering, qualitative methodology (especially regarding gender), environmental cultural studies, sound art and fiction writing. Her main research interest has for decades been soundscape studies, culminating into the internationally groundbreaking publication Acoustic Environments in Change (2009) together with Simon Fraser University. The book sums up a major research effort – four consecutive interdisciplinary, international soundscape research projects studying the changing European soundscapes. The book has already become a ‘classic’ and a model for several soundscape ethnographies throughout the world. Her co-operation with the Canadian World Soundscape Project WSP and World Forum for Acoustic Ecology includes the co-founding of the International Yearbook of Soundscape Studies which became the Soundscape journal, together with the founder of the field R. Murray Schafer, many keynote speeches in conferences and the heading of the organizing committee of large annual global conference in 2010. A co-worker since 2003 has been Steven Feld, one of the founders of anthropology of senses, with whom we have worked on several research projects, and created two radio features, combining art and science, for Finnish Broadcasting Company. One of her radio features, Lesconil - memories of listening, was shortlisted to be sent to Prix Italia by Radio Atelier, FBC, in 2006.

Due to dedicated long term work in developing sound studies’ methodology, she was invited as a founding member, scientific committee member of conferences, and member of the editorial of the journal of the French led Le Réseau Ambiances | The Ambiances Network. Her projects have been mentioned among the significant contemporary cultural research expeditions led by Finns in a major book on history of research expeditions. After having different leadership roles in the Finnish Society for Ethnomusicology, she has been among founders of several new associations, including Finnish Society for Cultural Studies, and was its Vice Chair and Chair for the first four years.