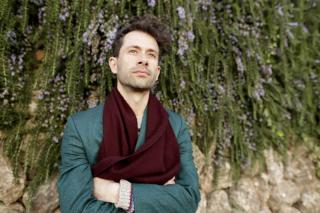 Jacob Kirkegaard (born 1975 in Denmark) is a sound artist. He graduated at the Academy of Arts and the Media in Cologne. Jacob is exploring sound in art with a scientific approach and his sound works focus on investigations into the potential musicality in hidden sound layers in the environment. In this context he has been capturing and exploring sounds from, for example, volcanic earth, ice, atmospheric phenomena, nuclear power plants and deserted places. His piece "Labyrinthitis" was created from sounds recorded inside his inner ear. Recording tools used include accelometers, hydrophones and home-built electromagnetic receivers. has become famous for his recordings from Chernobyl (2005), Iceland (2012) and Greenland (2015), where he began using special microphones — geophones, designed for the work of geologists and glaciologists. His installations Melt (2015) and Isfald (2013) became hits, showing that it was enough to demonstrate what it sounds like from inside a melting glacier in Greenland to discover a universe completely unknown to most people. It resembled a work of dark ambient, a genre with a large fan community. Kirkegaard’s later work *Opus Mors *consisted of recordings taken in a morgue during the autopsy, cremation and decay of a human body.