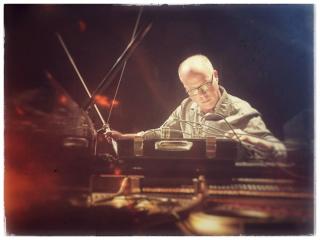 Jay Needham is an artist, radio producer and composer. His sound and visual works address the politics of borders and the aesthetics of acoustic reception. His compositions activate listening as an irreplaceable component of an artistic cognitive process. Needham’s current work advances the critical placement of radio and the transmission arts as one of the most persuasive contemporary forms of cultural communication. His sound art and radio productions have appeared at museums, festivals and on the airwaves worldwide including the Sydney Opera House, Kiasma Museum of Modern Art in Helsinki and Chicago’s Steppenwolf Theatre. Through applied aspects of his research, Needham strives to affect positive change and bridge the gap between the arts and the science of sustainability. His collaborations with grass roots organizations such as the Pan American Conservation Association have increased awareness of the importance of natural places and disappearing soundscapes around the planet. Themes relating to locality and cultural memory appear in his current research focusing on his family ties to the origins of the atomic bomb. Needham holds an MFA from The School of Art at California Institute of the Arts. Recent writings and selections of his sound works appear in Hearing Places published by Cambridge Scholars Press.

He notes about his work: As a sound artist, I have been creating a series of artworks that interweave themes relating to borders, and issues concerning natural spaces that are currently or were formerly occupied by military forces. These are protected landscapes and signal-scapes of a different order, chosen initially for their benefits to defend and promote American interests, often times once secret, well guarded and fortified. In the case of “Listening at the Border”, that radiophonic work focused on the story of an American sound spy whose duty was to listen and translate coded voice traffic from inside North Korea. “Narrative Half-Life” is an ongoing series of sound and visual works that trace my familial and military ties to the origins of the atomic bomb and to Hanford, Washington, a 500-square-mile Department of Energy site and home to the first full scale atomic reactor. And Ecosonidos de Panama Verano Tropical is part of an ongoing project on a former military base outside Panama City.