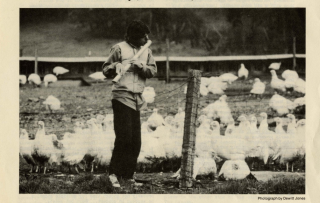 Jim Nollman (born 1947) is an American composer, conceptual artist, author of five books, and an environmental activist. He graduated from Tufts University in 1969. In 1973, he composed a Thanksgiving Day radio piece “Turkey Song”, that featured him singing and playing flutes with 300 tom turkeys. From that point forward, he began his lifelong pursuit of composing and recording "interspecies music" with other animals. Nollman has released several albums on Smithsonian Folkways Records, including Playing Music with Animals: Interspecies Communication of Jim Nollman with 300 turkeys, 12 wolves and 20 Orcas. Nollman directed one of Greenpeace’s first overseas projects, at Iki Island, Japan, where fishermen were slaughtering dolphins to compensate for human overfishing. In 1978, Nollman founded the organization Interspecies, which supports artists’ efforts to communicate with animals through music and art. Its best-known project is a twenty-five year study using live music to interact with wild orcas off the west coast of Canada. Jim Nollman has spent a lifetime performing live with "super-human" improvisers—musicians that never stepped foot inside of Juilliard and has dedicated his life to the art and science of “interspecies” communication and music.

Music for Swimming and Flying