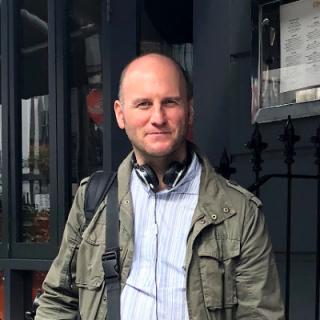 John Levack Drever (born in Edinburgh, Scotland, 1973) and raised between Dalkeith and Edinburgh is Professor of Acoustic Ecology and Sound Art at Goldsmiths, University of London, where he leads the Unit for Sound Practice Research (SPR). He studied Music at the University of Wales, Bangor (1992-95), followed by an MMus study in Electroacoustic Music Composition at the University of East Anglia (1995-6). In 2001 he was awarded a PhD from Dartington College of Arts, for a programme of research titled 'Phonographies: Practical and Theoretical Explorations into Composing with Disembodied Sound'. Following his PhD, Drever co-ordinated ‘Sounding Dartmoor - a public soundscape study’, in collaboration with The Touring Exhibition of Sound Environments (TESE), Aune Head Arts, and the Digital Crowd, University of Plymouth. During 2003-04 he was an Arts Council of England & AHRB Arts and Science Research Fellow with Centre for Computational Creativity, City University exploring ‘electronic music performance interfaces that learn from their users’. He was awarded a Diploma in Acoustics and Noise Control from the Institute of Acoustics in 2012, with specialist modules in Building Acoustics and Environmental Noise, becoming a full member of the Institute of Acoustics in 2013. Before taking up his post at Goldsmiths, Drever was an associate lecturer for City University (London), Dartington College of Arts, Exeter University and the University of Plymouth, lecturing in Music, Media Arts, Media Lab Arts and Visual Arts. During the autumn semester of 2007 he was a Visiting Scholar at the Critical Intermedia Laboratory, School of Creative Media, City University of Hong Kong and in the summer of 2016 he was a Guest Professor in The Department of Digital Design and Information Studies, Aarhus University, Denmark. An elected director of Sonic Arts Network since 2004, Drever became its final chair in 2008. He was a co-founder (1998) and chair of the UK and Ireland Soundscape Community (a regional affiliate of the World Forum for Acoustic Ecology) for whom he chaired Sound Practice: the 1st UKISC Conference on sound, culture and environments in 2001 at Dartington and Sound Practice 2006 at Goldsmiths. With Aki Pasoulas he co-chaired The Symposium on Acoustic Ecology at the University of Kent in 2013 and in 2011 he co-chaired the Phonography Colloquium at Goldsmiths with Emmanuel Spinelli for SPR. In May 2014 he co-directed, Sound Art Curating Conference: Histories, Theories and Practices of Sound Art, at Goldsmiths, and The Courtauld Institute of Art in collaboration with Operational and Curatorial Research in Contemporary Art, Design, Science and Technology (OCR). He has also been actively involved in the Noise Futures Network (EPSRC) and COST Action TD0804 Soundscapes of European Cities and Landscapes. Drever is a member of the AHRC Peer Review College (2009-16) and is a Visiting Research Fellow at Seian University of Art and Design, Japan. In 2013 he became an Academician of The Academy of Urbanism.