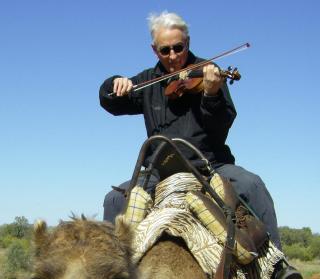 Jon Rose (born in the UK, 1951) is an Australian violinist. A polymath, he is at much at home creating large environmental multi-media works as he is playing the violin on a concert stage. Most celebrated is the worldwide Fence project. Throughout the 1970's, first in England and then in Australia, he played, composed, and studied in a variety of genres: from sitar playing to country & western, from new music composition to commercial studio session work, from bebop to Italian club bands, from big band serial composition to sound installations. He became the central and best-known figure in the development of free improvisation and sound art in Australia, performing either solo, with fellow improvisers such as Rik Rue and Jim Denley, or with an international pool of improvising performers called The Relative Band. In 1977, he started Australia’s first musician run collective for the promotion and recording of improvised music, Fringe Benefit. The collaborative LP Tango with Martin Wesley-Smith was a world first in violin and sampling improvisation. In 1986, he moved to Berlin to realize his ongoing project The Relative Violin, which is the development of a total artform based around the one instrument. This prompted innovation in the fields of new instrument design. In environmental performance (such as bowing fences in the Australian outback), in new instrumental techniques (tested sometimes in uninterrupted marathon concerts of up to twelve hours), and in both analog (built into the violins themselves) and interactive electronics. His alternative, personal, and revised history for the violin used the mediums of radio. In the area of interactive electronics, his work is considered exemplary, having pioneered the use of the MIDI bow in the Hyperstring project in the 1980s in conjunction with the Steim Institute, Amsterdam, and with whom he continues to collaborate, often in interactive projects involving sport, games, or the environment. Another phenomena since 1980 is the violin-playing dynasty known as The Rosenbergs, part quasi-biographical appendage and part surrealist satire. In 2002 he set up the Australia Ad Lib website for the Australian Broadcasting Corporation: an interactive guide to the wild, the weird, and the vernacular in Australian music.