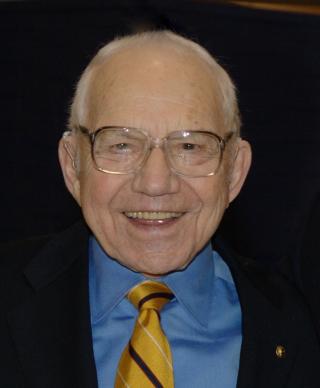 Leo Leroy Beranek (born 1914 in Solon, Iowa, died 2016, in Westwood, Massachusetts) was an acoustics expert and a founder of the company Bolt, Beranek and Newman. His ancestors came from West Bohemia. Edward's Baranek (Leo's father paternal grandparents) Josef Beránek and Anna Šimandlová were from Nynice and Jarov respectively. Beranek attended Cornell College in Iowa, where he graduated in 1936 with a bachelor’s degree in physics and mathematics. After finishing his doctorate at Harvard University in 1940, he remained at Harvard and became director first of the Electro-Acoustic Laboratory, then of the Systems Research Laboratory. From 1947 to 1958, Beranek worked at the Massachusetts Institute of Technology (MIT) as a professor of communications engineering. As director of Harvard’s Electro-Acoustic Laboratory, he perfected the Hush-A-Phone, a telephone accessory that triggered a cascade of regulatory lawsuits from the 1950s to the 1980s. He created the world’s largest muffler to quiet jet engines. At MIT, Beranek became acquainted with another MIT professor, Richard Bolt. With Paul Newman, they founded the acoustical consulting firm BBN. One of BBN’s first major projects was to advise on acoustics and sound systems in the new United Nations headquarters. BBN developed ARPANET, the forerunner to the Internet and email. In 1969, Beranek became president of Boston Broadcasters, Inc. Beranek was a member of the National Academy of Engineering and a fellow of the American Academy of Arts and Sciences. He was a fellow of the American Physical Society and an honorary member of the American Institute of Architects.