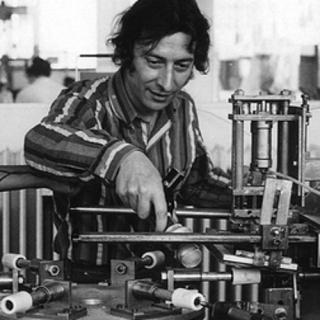 "Following the total disappearance of abstract sounds, this piece could be considered a sonic photographic slide, the outcome of a whole evolutionary process. The most faithful and realistic reminiscence possible of a fishing village at dawn. First conceptions about minimalism." Luc Ferrari

In Presque rien no. 1: Le lever du jour au bord de la mer (Almost Nothing No1, Daybreak at the Seashore) (1967-70) Ferrari assembled fragments of his daily field recordings into a complete whole, a sonic tapestry woven from the recurring rhythms of daily life. It consists of a slightly altered recording made in 1968 of early-morning sounds at Korčula, on the Adriatic coast. The recording itself was part of a larger series undertaken by Ferrari and was spurred on by his cultivation of a heightened listening approach. Embedded into Presque rien is a recognition of the capacity for a recording to serve as a sonic snapshot of a specific location at a particular time that allows one to engage in an affective performance through listening. In this way, Ferrari turns the documentary recording of sounds from a given locale into an aesthetic object through the subtle manipulations and framing provided by the firm beginning and ending. Eric Drott has noted that Ferrari conceived of this work within the milieu of the social upheavals of 1968. Presque rien was seen by the composer as the harbinger of an emerging kind of "amateur art":

"Made possible by the increasing affordability of portable tape recorders, the realization of this ambition would further require that tape music be demystified, stripped of its aura of technical complexity. In this regard, "Presque rien", with its minimal editing, offered an ideal prototype for such a practice. More than simply an object of mass contemplation, the piece seems to have been conceived as an incitement to mass creation." (L.F, in "Michael Palmese: The World Ear Project (1970–87): Soundscapes, Politics, and the Genesis of Acoustic Ecology

Equipped with a portable tape recorder, Ferrari recorded sounds and soundscapes even before joining GRM in 1958. He described this method as search for ‘anecdotal’ sound: capturing conversations in the street, or farmyard animals. In Hétérozygote (1963-4), the frantic tones and percussive clamour familiar from musique concrète were juxtaposed with the anecdotal, creating a surreal fabric of abstracted sonic textures, environmental recordings and speech. In interviews Ferrari mentions his negative approach to the French society in early 60ies. He described it as "a combination of conspicuous militarism and ubiquitous police presence". His reaction to such tense atmosphere was his turn to ecology. Such concepts influenced his famous “ecological” multimedia piece from 1972 Allo! Ici la Terre. As a member of the Groupe de Recherches Musicales (GRM), Ferrari spent time scouring flea markets and factories for miscellaneous bits of metal, capturing field recordings that he later processed in the sound studio. His approach was different: Karlheinz Stockhausen developed rather scientific approach to synthesised electronic music at the West German Radio studio in Cologne, Pierre Schaeffer was searching for "acousmatic experience", and his music should enable the listener to appreciate the abstraction of complex sounds, its source mangled beyond recognition. Ferrari's concept of musique concrète was like creating an anarchic collage or assemblages from found sonic objects. When Ferrari presented his Presque rien No1 to his colleagues, they rejected it, because they didn't considered it as "music".

Beside Raymond Murray Schafer's concept of soundscape and acoustic ecology was Luc Ferrari another important figure of the idea that sounds should be liberated from the human control.

Luc Ferrari (February 5, 1929 – August 22, 2005) was a French composer and filmmaker of Italian origin. Born in Paris studied the piano under Alfred Cortot, musical analysis under Olivier Messiaen and composition under Arthur Honegger. His first works were freely atonal. In 1954, Ferrari went to the United States to meet Edgard Varese, whose Déserts he had heard on the radio and the tape part in Déserts was an inspiration for Ferrari to start using magnetic tape in his music. In 1958 with Pierre Schaeffer and Francois-Bernard Mâche he co-founded the Groupe des Recherche Musicales. By the early 1960, Ferrari had begun work on a piece for magnetic tape which uses environmental sounds in "an organized and poetic, though non-plot oriented manner." The use of ambient recordings was to become a distinctive part of Ferrari's musical language. He has taught in institutions around the world, has worked for film, theatre and radio. Ferrari continued to write as well instrumental music beside his tape pieces. He has also made a number of documentary films on contemporary composers in rehearsal, including Messiaen and Karlheinz Stockhausen.