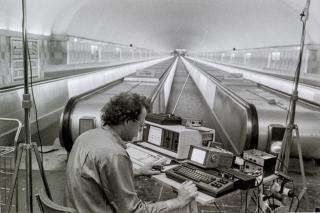 Max Neuhaus (1939 – 2009) was an American musician, composer and sound artist. Neuhaus produced the project Listen - a listener’s manifesto, organized from 1966 on in different formats: lecture, newspaper article, post card, self-adhesive sticker, poster, as well as sound walks in New York neighbourhoods. This pivotal work in the artist’s career, somewhere between musical field and artistic field, carries on the conquest of the “infinite variety of noise-sounds” declaimed by Russolo in his manifesto, not without inheriting his fascination with the industrial city and its infrastructures. If one of the stages of the walk is dedicated to listening to the sounds of an electric power station, the one that leads the group of participants to park under the Brooklyn Bridge once again involves passing vehicles, this time perceived as a flow of sound released by the traffic, magnified by the bridge’s vibrating energy. However, even though there is a continuity between Russolo’s “modern ear” and the choreographed listening of Listen, the historical transition between the two periods is not made without breaks. We must not in fact forget that the urban territory of New York occupied by Listen was that of a city subjected to a major process of de-industrialization caused by the crisis of the 1960s and 1970s.

In his Moment works, a series of large scale sound works for whole communities, he utilizes the cessation of sound to create a periodic sense of silence throughout the community, both marking time and creating reflective moments. The most recent of these is a realization for the city of Graz commissioned by the Landesmuseum Joanneum.

Max Neuhaus’s Times Square is a rich harmonic sound texture emerging from the north end of the triangular pedestrian island located at Broadway between 45th and 46th Streets in New York City. Originally installed at this site from 1977 to 1992, the Times Square Street Business Improvement District (BID), and Christine Burgin collaborated with MTA Arts for Transit and Dia to reinstate the project in May of 2002. Visitors and residents in Times Square may experience the artwork 24 hours a day, seven days a week.