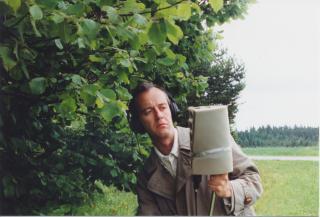 Peter Ablinger is an Austrian composer and sound artist. Born in Schwanenstadt, Austria in 1959 he first studied graphic arts and became enthused by free jazz. He completed his studies in composition with Gösta Neuwirth and Roman Haubenstock-Ramati in Graz and Vienna. Since 1982 he has lived in Berlin, where he has initiated and conducted numerous festivals and concerts. In 1988 he founded the Ensemble Zwischentöne. In 1993 he was a visiting professor at the University of Music in Graz. He has been guest conductor of Klangforum Wien, United Berlin and the Insel Musik Ensemble. Since 1990 Peter Ablinger has worked as a freelance musician. From 2012-2017 he was Research Professor at the University of Huddersfield. In 2019 he was a Guest Professor at the Royal Conservatory in The Hague and the Leiden University. Since 2000 he has been engaged in various forms of non-institutional teaching and work with private students.

Peter Ablinger is one of the few artists who uses noise without any kind of symbolism – not as a signifier for chaos, energy, entropy, disorder, or uproar; not for opposing something, or being disobedient or destructive; not for everything, for eternity, or for what-have-you. As in all these cases of music deliberately involving noise, noise is the case, but for Ablinger this alone. Ablinger has also come a long way in questioning the nature of sound, time, and space (the components usually thought to be central for music), and his findings have jeopardized and made dubious conventions usually thought irrefutable. These insights pertain to repetition and monotony, reduction and redundancy density and entropy. (Text: Christian Baier, translation by Bill Dietz)

"Once — I believe it was 1986, high summer — I came on something remarkable while on a walk through the fields East of Vienna near the Hungarian border and close to the birthplace of Haydn. The corn stood high and it was just before harvest. The hot summer east wind swept through the fields and suddenly I heard das Rauschen (noise/the sound). Although it was often explained to me, I can still never say how wheat and rye are different. But I heard the difference. I believe it was the first time I really heard outside an aesthetic circumstance (say, a concert). Something had happened. Before and after were categorically separated, had nothing more to do with each other. At least it appeared to me then that way. In hindsight I recognize/remember other comparable experiences that had to do with a jerking open of perception, but the walk through the corn fields was perhaps the most momentous. For one way or the other, it seems to me, all the pieces I’ve made since have to do with this experience. Even the pieces not dedicated to noise, or those played with traditional instruments, etc." (Peter Ablinger, translation by Bill Dietz)