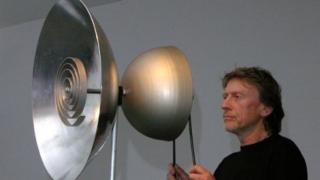 Phil Dadson (born 1946 Napier, New Zealand) is a seminal figure in New Zealand’s art history, both for pushing the boundaries of sound and intermedia art since the 70s and for his influence on a generation of now leading mid-career artists. In terms of pure sound he is attracted to intricate texture, - the microscopic, the unexpected, the naturally rhythmic and the adventurous – to sound atmospheres and layered perspectives (distant to foreground), sounds that conjure association, mood and imagination, that convey ideas and express mind, heart and soul. He started his career as an experimental musician with the foundation of the Scratch Orchestra (1969). He went on to study sculpting in Auckland and taught fine arts at the Elam School of Fine Arts until 2001, when he resigned in order to focus on his own work. In 2005 he was made Officer of the New Zealand Order of Merit for his contributions to the national arts. Appointed to the Sculpture Department at Auckland University’s Elam School of Fine Arts in 1977, Dadson held the position of Head of Intermedia/Time-based arts from 1986 – 2001. In 2001 he received a New Zealand Arts Foundation Laureate award, in 2003 an Antarctic Artist Fellowship and was appointed an Officer of the New Zealand Order of Merit (ONZM) in 2005.