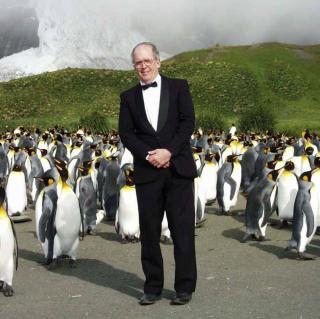 Roger Searle Payne (1935) is an American biologist and environmentalist famous for the 1967 discovery (with Scott McVay) of whale song among humpback whales. Payne later became an important figure in the worldwide campaign to end commercial whaling. He spent the early years of his career studying echolocation in bats (and how their food, moths, avoid them) and auditory localization in owls. Desiring to work with something more directly linked to conservation he later focused his research on whales where, together with researcher Scott McVay, in 1967 they discovered the complex sonic arrangements performed by the male humpback whales during the breeding season. These findings were published in the article Songs of humpback whales in 1971. Payne describes the whale songs as "exuberant, uninterrupted rivers of sound" with long repeated "themes", each song lasting up to 30 minutes and sung by an entire group of male humpbacks at once. The songs would be varied slightly between each breeding season, with a few new phrases added on and a few others dropped. Payne has led many expeditions on the world's oceans studying whales, their migrations, cultures and vocalizations.

Payne was also the first to suggest fin whales and blue whales can communicate with sound across whole oceans, a theory since confirmed. Some of Payne's recordings were released in 1970 as an LP called Songs of the Humpback Whale which helped to gain momentum for the Save the Whales movement seeking to end commercial whaling, which at the time was pushing many species dangerously close to extinction. Commercial whaling was finally banned by the International Whaling Commission in 1986.

In 1975 a second LP was released, and in 1987 Payne collaborated with musician Paul Winter putting whalesong to human music. Whale recordings by Frank Watlington(with commentary by Roger Payne) were released on a Flexi disc soundsheet inside the January 1979 National Geographic magazine. This issue, at 10.5 million copies, became the largest single press run of any record at the time. In addition to whale recordings Payne has also published books and worked with film crews on many television documentary productions and on the IMAX movie Whales: An Unforgettable Journey.