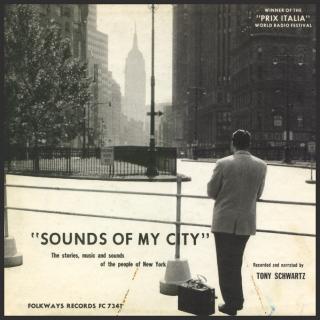 Tony Schwartz (1923-2008) was an American sound ingineer, radio and televisiton director and educator. He created more than 20,000 radio and television spots for products, political candidates and non-profit public interest groups. Schwartz wa called a “media guru,” a “media genius” and a “media muscleman.” Schwartz’s produced the first anti-smoking ad to ever appear. Born Manhattan in 1923, a graduate of Peekskill High School (1941) and Pratt Institute (1944), Tony Schwartz had a unique philosophy of work: He only worked on projects that interested him, for whatever they could afford to pay. For thirty one years (1945-1976) he created and produced a weekly radio program of people and sounds of New York on WNYC (AM & FM). For over 15 years he wrote a weekly column for Media Industry Newsletter (MIN). When Marshall McLuhan met Tony Schwartz, he said he met “a disciple with twenty years prior experience!” Later, McLuhan and Schwartz shared the Schweitzer Chair at Fordham University. For many years he was a Visiting Electronic Professor at Harvard University’s School of Public Health, teaching physicians how to use media to deal with public health problems. He also taught at New York University and Columbia and Emerson colleges. Schwartz was a frequent lecturer at universities and conferences. He was awarded honorary doctorates from John Jay, Emerson and Stonehill Colleges. Designated the year’s “Best Social Studies Teacher in the United States” because of a Sociological Communications course he taught to high school students, Schwartz explained, “I merely taught them how to document the life around them in sound and pictures.” Documenting life in sound and pictures Schwartz began in 1945, when he bought his first Webcor wire recorder and began to record the people and sounds around him. From this hobby developed one of the world’s largest and most diverse collections of voices, both prominent and unknown, street sounds and music, a collection that resulted in nineteen phonograph albums for Folkways and Columbia Records.