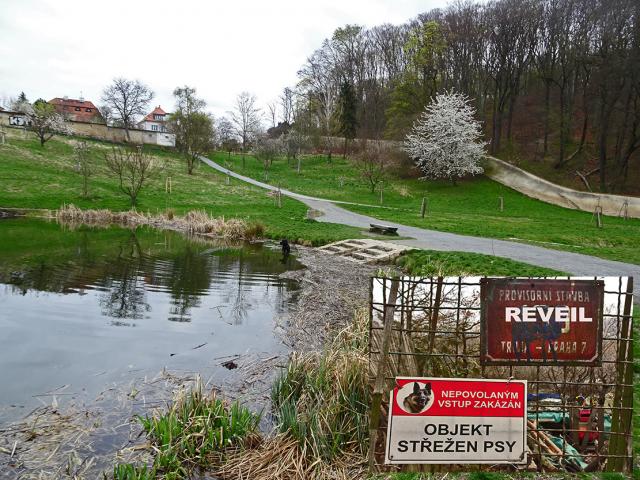 Cense Network invites you to take part this year again in the collaborative planetary streaming and listening project REVEIL 9.

This year I broadcast from our garden to point to the level of bioiversity. We designed the garden so that it is friendly to birds and insects. Every year, common starlings nest in an old apple tree. The garden turtle nested on an old apricot for the first time. Or for the first time, a common redstart nested in an old drainage pipe.

Since March 2021, we are broadcasting from Lužánecký Park in Brno continuously via locus sonus

sonicity.cz is mapping soundscapes of Prague since 2008. The Prague Soundcamp 2022 is related again to the Bio Troja project, but the location is rather unstable. Lets hope it will work out in Black Bridge. sonicity.cz homeradio CENSE Bohemian Unit

This year we will be making a small sound camp at a 'forest hut' in the Kiidjärve–Kooraste Recreation Area of Põlva county in south Estonia. The camp will involve artists, naturalists and students from the Estonian Academy of Arts. The soundscape will include fauna from the nearby bogs and lakes.

Facing north from Jazi beach one can see Island Pag and Velebit mountains. As such it is very often to hit by strong northern bura (bora) winds from Velebit, and offering shelter from south "jugo" winds. Molat-Zadar program CONA

The near-natural Königsheide is a mixed forest, mainly consisting of oaks and pines. Originally it was connected to the Köllnische Heide. Königsheide serves as a popular local recreation area for the population of Treptow-Köpenick and Neukölln. However, the characteristic woodland and heath areas also represent an important natural habitat for rare plant species. To the north is the imposing former GDR children's home Makarenko, which is now used as a residential building. radio.earth, field radio

Das Nasse Dreieck (The Wet Triangle) - formerly part of Berlin Wall death strip - is a rather hidden green space bounded on two sides by busy rail lines and and on the third by well fenced allotments. The entrance is tucked away out of easy sight and one gets the feeling that only locals know it. Kids play here after school - there is a great climbing tree - otherwise it is a dog walking domain. As the name suggests the ground is pretty soggy, pools form at the slightest suspicion of rain and footsteps squelch. Clumps of low trees and thorny bushes are home for chattering sparrows, crows, magpies. Trains sing or rumble past, distant building sites and bells sound from afar. Over time the presence of close birds, sub base freight trains and the distant city gives every possible mix from urban soups to transparent spatial perspectives. Das Nasse Dreieck

KRA stands for the future in ecology, art and media. To build this, KRA is inviting (not only) artists from various disciplines, working with various tools and media (low-power electronics, sound and music, performances, texts of all kinds presumably experimental, architecture, plants, images, mud grass and other objects, from micro to macro and beyond. We expect activities, which (have to) lead to a finished installation, an exhibition, or any artwork, but that are related to a new kind of presence in the environment. Something avoiding intrusiveness but unseen before altogether mobile_kra.ogg

The characteristics of the sound are notably rural with a large variety of natural sounds including many birds - a rare White-tailed eagle nests on the rocks below the house in the valley, just above the Berounka river. The area around the village is protected and so a lot of unique species are present. You might also hear insects, cattle, dogs, horses and the sounds of a colorful village life. There is a strong dynamic contrast between daytime and nighttime sounds and a sense of sense of depth - in the foreground you will hear sounds of the farm and in the background sounds of the village and a valley in which a small river runs. In a sense this soundscape says a lot about rural areas in Czech Republic in general; areas which are rich in terms of natural sounds but often disturbed by the noise of traffic or agriculture machinery. Skryje radio

uni.Sol_initiative is aspiring to be all-inclusive and ever-evolving project exploring the potential of extrasensory communication in purpose to facilitate deeper connection in between all entities. An intention to explore and implement the idea of freedom, to enhance an awareness of human relationship with surrounding environment through practice of listening. introduction

The streaming is made during a public listening session followed by a discussion with Georgian Constantin, an amateur ornithologist, bird photographer, and neighbor. Event organized together with Cișmigiu Civic Initiative

Reveil makes a 24+1 hour loop of earth, travelling west on live audio feeds sent in by streamers at daybreak from their locations.

For details on running a stream with a phone, laptop or Raspberry Pi, see Stream

To let us know you're joining, please sign up. You can also go ahead and create a stream page, which will be featured during the broadcast and join the Reveil archive.

We look forward to your sounds.

Streams are available on the Icecast server and public soundmap by Locus Sonus (ESAAIX). The main feed is hosted by Wave Farm WGXC in Acra NY and broadcast over 20+ FM and net radio stations around the world. Our broadcast partner in London is Resonance Extra.

Reveil 9 is produced with the Acoustic Commons network: