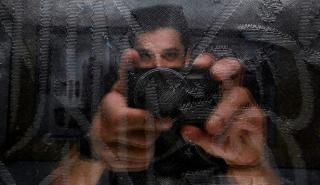 Curator, artist and researcher Mikel R. Nieto studied art in San Sebastian, Madrid and Barcelona. For years he has been deeply involved in phonographic practice and the resulting theory. He has given workshops in a number of cultural centres and universities. He forms part of the team behind the sound map of the Basque Country soinumapa.net, and Hots! Radio, as well as the Mediateletipos.net dissemination portal. Together with José Luis Espejo and Xabier Erkizia coordinated the Observatorio de la Escucha or (Listening Observatory). He has worked on numerous occasions in partnership with the dancer and choreographer Jone San Martin in different dance projects for his sound design. Also he collaborated with Pascal Merighi and Thusnelda Mercy, who worked for Pina Bausch for many years. His book "Dark Sound" describes research he conducted in 2014 on the impact of the noise, direct or indirect, generated by the oil industry in its different phases of development among towns, the environment and wildlife in the Amazonian jungle in Ecuador. His second book, in collaboration with the anthropologist Tim Ingold and the philosopher Carmen Pardo A soft hiss of this world was printed white on white and is focused in the loss of snow in the landscape because of the Anthropocene and how it affects to language and to the soundscape through the sound of snowflakes.

The research project “A soft hiss of this world” is focused on the loss in many aspects such as the loss of language as a result of the Anthropocene through the absence of certain states and processes that occur naturally in the environment like different states of water, snow and ice. In Finnish there are more than forty terms to refer to them and because of the loss of these states in the landscape, the loss is also displaced to the language, in this case, the Finnish.*

This research project took these words as a starting point to make hundreds of hours of recordings in the Finnish landscape. The sound of snow, ice and snowflakes are the reference and the sound material of this research project. And to obtain these sounds, as well as the possible sound differences between each snowflake, special and specific microphones were developed for this very specific and fragile recording process.

Is it possible to record the impossible or what does not exist? There are three types of impossibility in each recording: the recording of a sound event due to its absence, its extinction or the impossibility of recording itself. The condition of possibility for the absence is the presence itself.